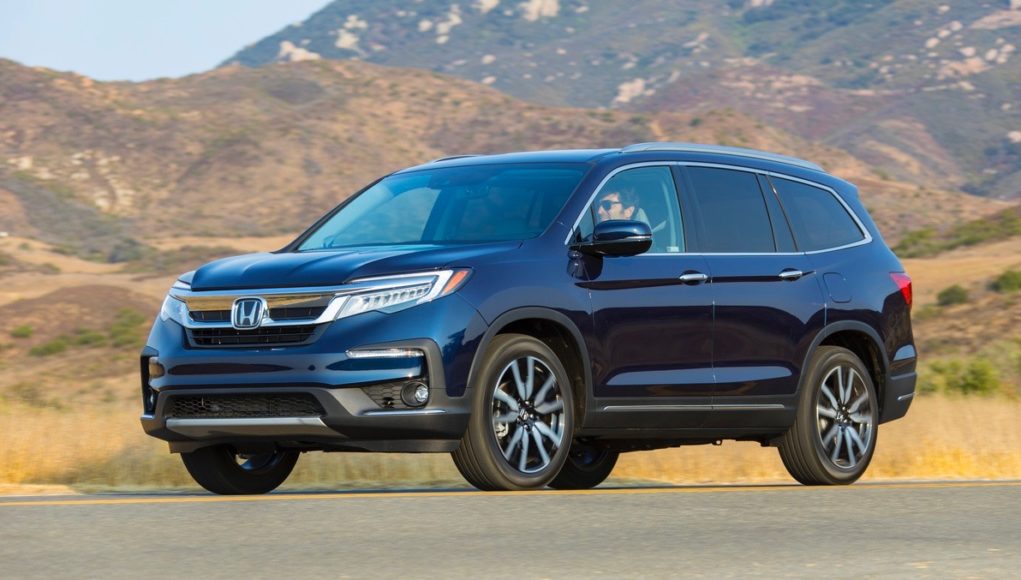 The 2020 Honda Pilot is a three-row family crossover at the top of its class and hits all the family “must-dos” like a completed weekend chores list. The three-row crossover has been with us for a few years now, and it’s one of our top picks in the class, even among newer competitors. With the 2020 Pilot, Honda has a three-row crossover in the right place at the right time. Its offered in LX, EX, EX-L, Touring, Elite, and Black Edition versions, the latter is new this year. Base front-wheel-drive versions cost just over $32,000, while top trims barely crest $50,000.  Regardless of price, the Pilot offers three rows of comfortable seats for up to eight, with enough cargo space for all of life’s (or kids) stuff.

Conservative and capacious, the 2020 Pilot doesn’t break any molds, it just does all of them well. The Pilot has aged well, although few people will confuse it for anything other than a big crossover. Its shapes are inoffensive and clean, and we appreciate its straightforward style inside and out. Last year the Pilot was updated with more chrome and headlights, but the new cars aren’t a departure from the current Pilots that have been on the road for a few years now. The shapes narrowly split the difference between minivan and crossover, and from the sides, the Pilot looks positively palatial. The organic, two-box shape is complemented by big windows and a curt crease along the body sides that breaks up any slab-sidedness. A new Black Edition for 2020, which was our test vehicle, paints most of the interior and exterior in, you guessed it, black. It’s mostly a Pilot Elite with an appearance package, and a little macho attitude.

The 2020 Pilot doesn’t sacrifice comfort, capability or power to haul big families these days. All 2020 Pilots are equipped with a 3.5-liter V-6 that makes 280 hp and an automatic transmission. Most Pilots will get a 6-speed automatic that deftly shuttles between gears, although Touring, Elite, and Black Edition versions get a 9-speed that has more cogs, but not significantly better fuel economy. Although the V-6 has good pull from a start, its best trick is refinement. The V-6 melts away into daily life, and most Pilots will be equipped with sound-insulating windshields and front windows. The V-6 is rated to tow up to 5,000 pounds, when properly equipped, which is enough to tow most weekend toys.

The 6-speed automatic keeps the 3.5-liter in its efficiency sweet spot and returns combined fuel economy in the low 20s. The upgraded 9-speed is just as proficient, although it hunts to find the right gear for quick passes. Some of the low-speed indecision was tamed a couple years ago, but perfect it is now. The suspension is tuned to filter out road imperfections, which it does well. Pilot LX, EX and EX-Ls ride atop 18-inch wheels with plenty of sidewall give, but 20-inch wheels don’t spoil the ride either. The Pilot steers well with confident responses, even if the Honda family crossover’s is asked to dance along the drive. The Pilot has more than seven inches of ground clearance to scramble up nearly any hillside, if that’s where the road goes.

The 2020 Honda Pilot is mid-pack among full-sizers for fuel economy. Available with a 6- or 9-speed automatic to drive the front two, or all four wheels, the Pilot’s fuel-economy is roughly the same, about 22 mpg combined. The EPA rates the 2020 Pilot at 19 mpg city, 27 highway, 22 combined with front-wheel drive and a 6-speed automatic. Opting for the optional all-wheel drive, dents fuel economy by 1 mpg across the board. Touring, Elite, and Black editions of the Pilot are equipped with a 9-speed automatic that bumps mileage up slightly. Front-drivers rate 20/27/23 mpg, and all-wheel-drive versions cut 1 mpg from each of those figures. Among three-row crossovers, the Pilot keeps pace. The Subaru Ascent manages about 22 mpg combined with AWD, and the 2020 Ford Explorer rates up to 24 mpg combined in its most efficient form. Ironically we averaged exactly 22 mpg overall during our week with an AWD Black Edition test vehicle.

The 2020 Honda Pilot is one of the safest picks among family crossovers with federal and independent testers agree that the 2020 Honda Pilot is safe in a crash. The family crossover netted a five-star overall rating by federal regulators and the IIHS gave it a Top Safety Pick award for 2019, which we expect to carry over to this year. The IIHS rated the Pilot’s automatic emergency braking “Superior” and noted that the Pilot avoided front crashes at 12 mph and slowed the crossover by 12 mph in the 25-mph test. Touring, Elite, and Black Edition models are equipped with uprated headlights that rate better by the IIHS. The standard headlights on most models rate “Acceptable.” In addition to front and side curtain airbags, the Pilot is equipped with a suite of active safety features that are standard on every model. Forward-collision warnings with automatic emergency braking, adaptive cruise control, and active lane control come standard, even on base models. Pilot EX and higher models get standard blind-spot monitors. Outward vision in the Pilot is generally good, although it’s a long look out the back windows.

Families won’t argue about what seats to take in the 2020 Honda Pilot. The 2020 Pilot comfortably carries families and cargo with room for up to eight passengers with 16.5 cubic feet of storage behind all three rows.  Adults can fit in all three rows of seats, which is relatively rare among competitors. We give applaud it’s above average spacious accommodations in all three rows and a generous cargo area, including small-item storage. The front seats are all-day comfortable, and on all but the base model, widely adjustable. Pilot EXs include a power-adjustable driver’s seat, EX-L and higher trims get a power-adjustable passenger’s seat.

The second row is a bench that can seat up to three, but Elite and Black Edition models sub in captain’s chairs. Captain’s chairs are also available on the Touring trim as a no-cost swap. Second-row riders get more than 40 inches of leg room, with a convenient one-touch button to tumble down for third-row access. The second row is nearly as comfortable as the first, with plenty of thigh support for long hauls. In the third row, Honda offers nearly 32 inches of leg room that’s better in practice than it is on paper. We’d suggest parking adults in the first two rows, although teenagers and small adults will fit fine there.

With all three rows in place, the Pilot has 16.5 cubic feet of cargo room, which is as big as many mid-size sedans’ trunks. Some of that room is vertical space, above the third-row headrests, for tall cargo or leaning towers of groceries.  Tumble down the third row and that space expands to more than 46 cubic feet. With the second row folded, cargo space maxes out to more than 80 cubic feet for adventurous runs to big-box stores. Honda fits the Pilot with hearty materials that feel durable for everyday family use. Inside, the Pilot is similarly sedated with a bevy of beige and gray surfaces that are hardly flashy, but also look ready to stand up to toddlers and pets. The low dash is a boon to forward vision, and the low window line soaks in available sunlight and brings it into the cabin. Pilots with a moonroof can be that much brighter.

Most Pilots will be fitted with an 8.0-inch touchscreen for infotainment that’s easy to learn and quickly configurable. A hard knob for volume is the only redundant control on the head unit, everything else uses the touchscreen, including radio tuning. The screen doesn’t wash out in direct sunlight and the screen is mostly responsive to our touch inputs. Honda’s built-in navigation isn’t as slick as smartphone-based systems such as Google Maps or Waze, so we happily plug in our phones to the system for those perks.

Honda offers LX, EX, EX-L, Touring, Elite, and Black editions of the Pilot. The base LX is spartan and doesn’t include many creature comforts for its low price of just over $32,000. On top of 18-inch wheels, the LX gets cloth upholstery, seats for eight, active safety features (that we cover above), a 5.0-inch display for audio without smartphone compatibility and one USB charge port. A Pilot EX starts at $35,525 for front-drive models and adds upgraded 18-inch wheels, blind-spot monitors, an 8.0-inch touchscreen for infotainment including Apple CarPlay and Android Auto compatibility, three-zone automatic climate controls, power-adjustable driver’s seat, heated front seats, and two USB charge ports.

The Pilot EX-L adds leather upholstery, a moonroof, and rear sunshades for $3,400 more. All-wheel drive is a $2,000 option on the LX, EX, and EX-L trims. The top-of-the-line Pilot Touring and Black Edition models cost about $50,000 and throw everything at the Honda hauler. Leather, standard all-wheel drive, heated and cooled front seats, a panoramic moonroof, uprated audio system, wireless phone charger, and 9-speed automatic transmission are all included in the top models. Touring and Black Edition models are virtually the same except, you guessed it, the Black Edition is mostly black.

The Honda Pilot is an impressive three-row family-hauling crossover without driving like a lack-luster minivan. The Pilot’s driving manners are one of the best in its class, it has room for your family and all their belongings, and yet can still haul you to a remote camping site or ski lodge. All the while the Pilot does one thing no other’s can match, it’s a Honda with great safety and years of reliability ahead of it.