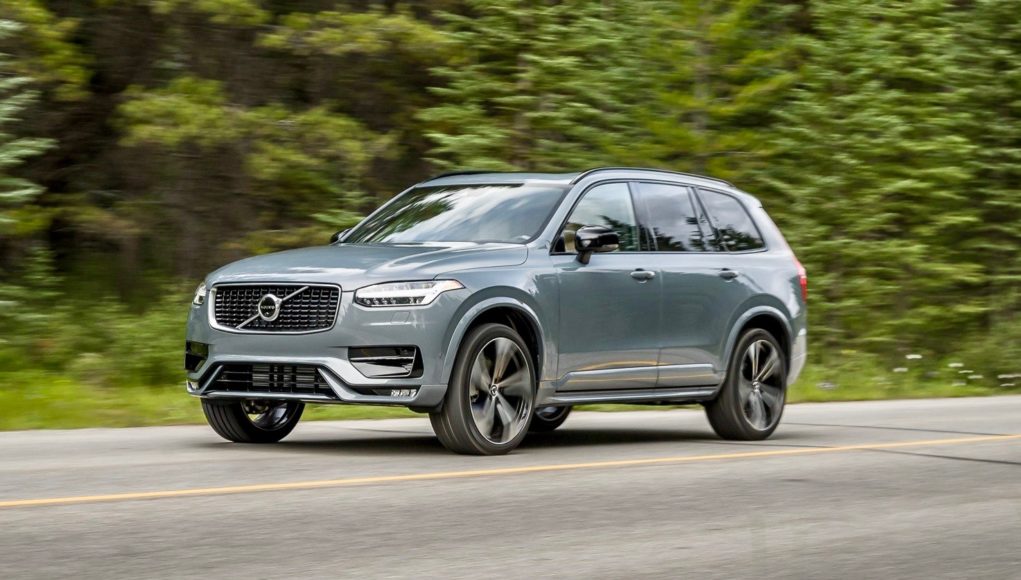 The 2020 Volvo XC90 is a sharpened and stylish Scandinavian standout among three-row luxury SUVs. It has a fantastic blend of impressive tech and safety features, a comfortable and practical interior, and head-turning looks. For the 2020 model year, Volvo has given the XC90 a mid-cycle refresh that includes some visual tweaks, Android Auto functionality, and a six-passenger version with middle-row captains’ chairs. The XC90 also gains a system that keeps the vehicle from drifting into opposing traffic. A 12.3-inch digital gauge display is standard, and plug-in hybrids get a larger battery.

Even the biggest Volvo fans will have to squint to spot the visual changes to the 2020 XC90, but that’s fine in our book, as this is one of the best-looking luxury SUVs on sale today. Thoughtful touches like distinctive LED headlights and sharp wheel designs make the XC90 look more like a Range Rover than a Ford Explorer, a helpful thing for a brand trying to move further upmarket. The interior is similarly impressive though reserved, and while we generally like the iPad-like infotainment system.

The 2020 Volvo XC90 is great to look at inside and out. When the current generation Volvo XC90 was introduced it ushered in a new age of Volvo design, and still looks as good as the day it was drawn. Though it received a slight visual refresh, we’re hard-pressed to spot the differences. Not that an SUV this sleek needs an update however, as the sharp lines, thoughtful details like front and rear light signatures, and a selection of handsome wheel designs make for one of the best-looking SUVs on sale.

The 2020 Volvo XC90 emphasizes comfort and grace over power and pace. Make no mistake, the 2020 Volvo XC90 is not a performance SUV by any measure, but it performs incredibly well from a comfort perspective with bonus points for its powertrains and for its supple ride.  The base T5 powertrain is a 2.0-liter turbo-4 with front-wheel drive and an 8-speed automatic transmission. Though its 250 horsepower and 258 pound-feet of torque is enough to get the job done, a 4,500-pound curb weight hampers acceleration. We’d opt for the T6 engine, which gets a supercharger to go with its turbocharger and an additional 66 hp for a total output of 316 hp and 295 lb-ft. All-wheel drive is standard with this engine too, making the package more enticing. Volvo also offers a T8 plug-in hybrid model with a new larger 11.6-kwh battery that boosts its electric-only range to 19 miles on a full charge. Though the spec sheet says it makes 400 combined horsepower, it can accelerate to 60 mph in less than six seconds.

Steering is light and direct, and the XC90 manages body roll well for a tall SUV, even giving its contemporaries from BMW and Mercedes-Benz a run for the money. Comfort is the name of the game, with optional adjustable air suspension that smooths things over well, but even the standard springs are pleasant enough. The Volvo is also incredibly quiet, especially for what amounts to a tall wagon with glass and large surface areas all around.

The 2020 Volvo XC90 uses small engines and offers a plug-in hybrid powertrain offering decent fuel economy for it’s size. The base, front-wheel-drive XC90 T5 manages 21 mpg city, 30 highway, 25 combined from its turbo-4 engine, while all-wheel drive drops those figures slightly to 20/27/23 mpg. The T6 gains plenty of horsepower from its supercharger but fuel economy takes a hit, managing just 18/26/21 mpg. With its improved battery, the T8 plug-in hybrid gets an mpg-equivalent (MPGe) rating of 55 mpg combined, though its combined rating on an empty battery is 27 mpg. Volvo’s warranty covers the XC90 for 4 years or 50,000 miles and includes scheduled maintenance at 10k, 20k , and 30k miles; a big win for buyers.

As you’ve come to expect from Volvo, the 2020 XC90 boasts great crash-test scores, impressive safety scores and standard active tech. The NHTSA gives the XC90 five stars overall except for four stars for the rollover rating, typical for SUVs. The independent IIHS also awarded “Good” scores for every test they perform except for the headlights, which received an “Acceptable” rating. This may keep the XC90 from receiving a Top Safety Pick award for 2020, though it did receive one in 2019. Active safety tech is standard, including automatic emergency braking, blind-spot monitors, parking sensors, adaptive cruise control, active lane control, road sign recognition, and rear collision mitigation. For 2020 the XC90 gains a system borrowed from the smaller XC60 that can keep the SUV from veering into oncoming traffic. There’s also a semi-autonomous Pilot Assist system available that can take over steering, accelerating, and braking duties on the highway.

Three rows of actual, adult-sized seats and ample cargo space make the XC90 more practical than its contemporaries, and a high roof line yields adequate head room throughout. Practicality is a plus with the 2020 XC90. It can seat seven comfortably, and it has a huge cargo hold that offers 15.8 cubic feet behind the third row, 41.8 cubes behind the second, and up to 85.7 cubic feet with both rear rows folded flat. That’s close to Escalade or Navigator levels at a fraction of the cost.

The 2020 Volvo XC90 is comfortable and very spacious, and well-trimmed. Inside, the XC90 practices Scandinavian minimalism, blending simple character lines with light and airy materials. Upon first inspection, the XC90’s interior impresses with a simple Scandinavian design that features light and airy available upholstery, real metal trim, optional open-pore wood, and finer details like a crystal shifter for the plug-in hybrid model. The seats are thin for more room but trademark Volvo in that they are incredibly coddling and comfortable. The rear seats feature the same design,  though still roomy enough for three adults in bench-seat form, two captain’s chairs are newly optional for 2020. We like the standalone third-row seats more than most though with more decent head and legroom.

The 2020 Volvo XC90 is well-equipped from the bottom up with extra points for its excellent infotainment and its standard and optional equipment. Since it’s been on the market, the XC90 has gained new standard features nearly every year, and as such, base models are well-equipped with standard active safety tech like automatic emergency braking, a power liftgate, a digital gauge cluster, 18-inch wheels, and a big touchscreen infotainment system with Apple CarPlay and now Android Auto. The Sensus infotainment system is tablet-like in its functionality and is probably the only system that can compete with Tesla. The standard smartphone connectivity technology is appreciated, and makes satellite navigation nearly redundant.

Base XC90 Momentum models get a power tailgate, four-zone automatic climate control, advanced safety features, synthetic leather upholstery, a digital gauge cluster, and a 9.0-inch touchscreen infotainment system with Apple CarPlay and now Android Auto for 2020. The R-Design trim adds sportier exterior design features including fascia treatments and wheel designs, as well as unique black leather interior appointments and aluminum trim, while the Inscription trim goes the luxury route with open-pore wood, fine perforated leather, and options like heated and cooled front seats with massage, and an excellent Bowers & Wilkins stereo. A Harman Kardon system is available too, but the Bowers & Wilkins really steals the show. The XC90 Momentum starts at $49,345 including a mandatory destination fee, while the R-Design rings in at $57,095. Inscription models will set you back $63,595, but include nearly every option you want minus the top-end stereo system. The plug-in hybrid T8 model starts at $67,995, but can be had in any trim.

The 2020 Volvo XC90 remains our top pick for large luxury crossovers; it does everything well and is a decent value compared to its German rivals too. Now which Volvo you pick really comes down to where you’ll be using it, if you’re going to be driving around town and funds are no issue, spring for the T8 with great fuel economy, but if you’re going to be driving longer distances daily, we’re recommend getting the T6 and saving the cash. There really isn’t a bad choice, because the 2020 Volvo XC90 really is stellar in every regard.