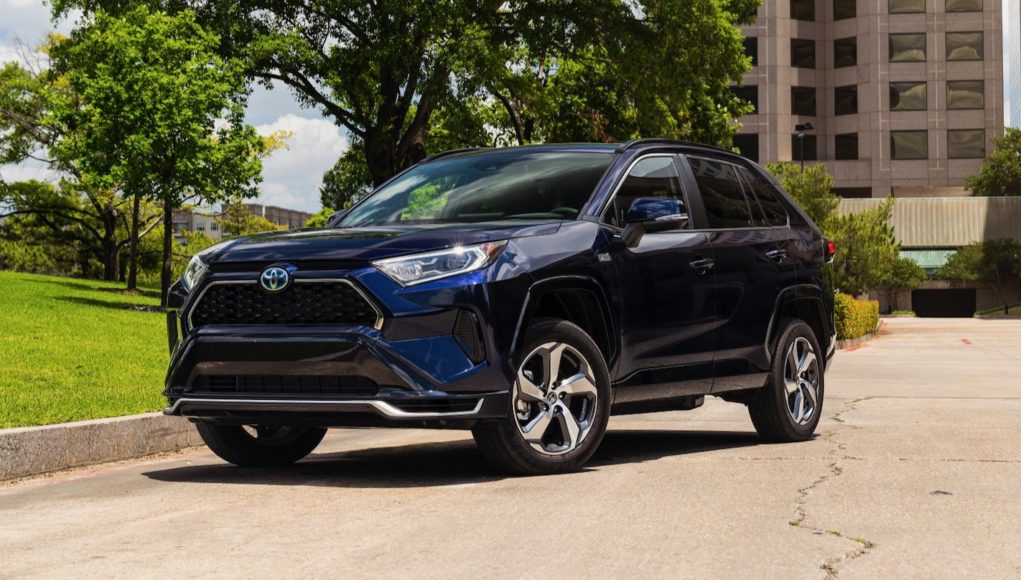 To date there haven’t been many hybrid variants of small two-row crossovers and, understandably, most have focused on efficiency. The new, range-topping 2021 Toyota RAV4 Prime is changing all that; in a big way. For 2021, Toyota is looking to reclaim the performance position in the compact crossover segment with a new plug-in hybrid. The RAV4 Prime may approach performance from a completely different angle, but with 302 horsepower the RAV4 Prime is quick, very quick. But not at the expense of frugality with an estimated all-electric range of 42 miles. You can have your cake and eat it too!

Toyota has taken this approach before, since the current RAV4’s sportiest trim level, the XSE, is only available as the Hybrid. Blessed with sharper suspension and steering tuning, it stemmed from the belief that hybrids had untapped performance potential. It, like every regular RAV4 Hybrid, is also more powerful than the base 2.5-liter four-cylinder, but the acceleration difference is meager with the additional output roughly compensating for the additional hybrid weight. We’re talking 0-60 times of 7.8 and 8.1 seconds, respectively, so nothing earth shattering. The RAV4 Prime changes all that. If anything, it’s the long-awaited replacement and spiritual successor to the 2006-2012 RAV4 and its optional 269-horsepower V6. That was a hoot to drive as it could blow the doors off most of its competitors with 0-60 in 6.3-seconds. So, when Toyota offered us the opportunity to get behind the wheel of the new RAV4 Prime, we jumped at the opportunity.

The 2021 RAV4 Prime shares its 2.5-liter Atkinson-cycle, gasoline-powered four-cylinder with the regular RAV4 Hybrid, but it’s tuned differently. With 177 hp it’s just 1 more than the Hybrid’s output, and the 165 pound-feet of torque tops the Hybrid’s by just 2. The 40-kilowatt (53 hp) rear-axle electric motor carries over too from the regular Hybrid, but the RAV4 Prime borrows the front motors from the larger Highlander Hybrid, for a total front-axle electric output of 134 kW (179 hp). This also means that all RAV4 Prime models come standard with all-wheel-drive. Since it’s a plug-in, that means the RAV4 Prime gets a much bigger battery pack than its run-of-the-mill hybrid sibling. The 18.1-kWh pack can provide enough juice for 42 miles of pure electric driving under normal conditions with a maximum speed of 84 MPH.

When it’s not in pure EV mode, the RAV4 Prime takes advantage of that stored energy to significantly boost both its performance and efficiency. The EPA has certified the RAV4 Prime at 40 mpg city, 36 mpg highway and 38 mpg combined. For comparison, the regular hybrid checks in at 41/38/40. So while it is fairly efficient, getting the best fuel efficiency is clearly not the RAV4 Prime’s top priority. Its plug-in-hybrid system produces a total system output of 302 horsepower, making it the most powerful compact SUV from a non-luxury brand and also the most powerful hybrid. Toyota says it’ll also go from 0-60 mph in 5.7 seconds, which takes 2 seconds off the regular Hybrid’s time and is noteworthy for a compact crossover at any price. On the freeway, the Prime offers the same confident thrust that it does off the line. Merging and passing are completely effortless, and the hybrid system always seems to know exactly where it needs to be for what you’re trying to do. It’s intuitive and seamless to the point where it’s easy to forget just how much is going on underneath.

We expected the RAV4 Prime to disappoint us through corners, but instead we came away impressed. Like that sportiest of current RAV4 trim levels, the Prime’s chassis holds its own just fine in terms of ride and handling, and while there’s an obvious soft edge to its dynamics, it never feels outmatched even on a winding road. The 19-inch wheels, a first for any RAV4 Hybrid model, help a bit in that regard without noticeably diminishing ride quality. Toyota’s engineers pretty much maintained the suspension and steering calibrations of the regular Hybrid XSE apart, but there are some minute differences to account for the RAV4 Prime’s additional mass (you can thank the batteries) and to increase refinement from a $40,000 new car. We can definitely tell a little extra polish was spent because the RAV4 Prime doesn’t have the jitteriness that plagues the standard XSE Hybrid’s ride quality.

Apart from being sporty and comfortable, the RAV4 Prime also offers all the crossover practicality you could ask for. While the bulkier plug-in powertrain does infringe slightly on the rear cargo space, it’s down just 4.1 cubic feet behind the second row compared to the standard Hybrid and only 6.7 cubes with the rear seats folded, checking in at 33.5 and 63.1 cubic feet, respectively. While that might sound like a lot, it’s actually quite minimal in execution since the whole load floor is just slightly raised.

At first blush, the RAV4 Prime could be mistaken for any other RAV4. While it gets some exterior bling to set it apart from the lesser models in the lineup, it still casts the same basic shadow. Toyota decided against including a solar panel roof on the RAV4 Prime because customers shopping in this price range expect features like a sunroof to be available, but the two are not compatible. Inside, it’s a similar story. The RAV4 Prime borrows the bulk of its interior from the RAV4 Hybrid, with most of the differences appearing in the instrumentation. The Prime’s plug-in configuration enables a handful of new drive modes, including “Charge,” which replenishes some of the all-electric range, and “Hold,” which lets you save it for later. There’s also EV mode, which is self-evident but keep in mind that using it curtails performance. Without the help of the gasoline engine, 0-60 climbs to 9.2 seconds. This is plenty for getting around solely on electricity, and more than adequate for those who want to commute exclusively on electric power.

Unfortunately, we weren’t able to draw any useful conclusions regarding fuel economy from our limited time with the RAV4 Prime. After driving around surface streets with the battery fully charged, we were able to eek out almost 44 miles of all-electric driving. On some freeway and back-road miles, we averaged about 42 mpg on gas alone, better than the Prime’s EPA city rating of 40 mpg. However, like all plug-in hybrids, fuel consumption really depends on how far you travel, how frequently you plug in, how lead-footed you are, and therefore how much you rely on electricity only. If your commute is around 20 miles or you can plug in at work, you could rarely use any gas at all.

Toyota is offering the RAV4 Prime in two flavors: SE and XSE. Standard equipment on the $39,220 SE includes heated front seats, a leather-wrapped steering wheel and shift knob, a power liftgate, and an 8-inch touchscreen infotainment system with Android Auto, Apple CarPlay and Amazon Alexa integration. A cold-weather package with heated steering wheel and heated rear seats will cost $825. The XSE for $42,545 gets you a 9-inch touchscreen, upgraded audio, wireless device charging, a moonroof and a fancy two-tone exterior paint scheme. While the price may seem steep, keep in mind that the price will be offset by up to $7,500 in the federal EV tax credit, plus state incentives depending on your location. It’s therefore possible that the plug-in could end up being cheaper than a regular hybrid.

The XSE model also unlocks one of the RAV4 Prime’s handy convenience features. For drivers who are constantly on-the-move, the standard 3.3 kW charger may not be adequate for keeping the Toyota topped off. While that’s more than adequate for overnight replenishing (itl takes about 12 hours on a standard 120-volt hookup; 4.5 hours on a Level 2 charger), the 6.6-kW charger offered with the XSE’s Premium package is the way to go if you need to juice up often and quickly since it drops the time required to top off the RAV4 Prime’s battery on a Level 2 connection to just 2.5 hours.

All-in, we walked away from our short time with the 2021 Toyota RAV4 Prime wanting more. It blends strong acceleration and impressive all-electric range with refined driving manners in a versatile family-friendly package. Combined with Toyota reliability and value, the RAV4 Prime is a clear winner and easily the best in its class. If you’re interested in one, I highly recommend getting in line now.