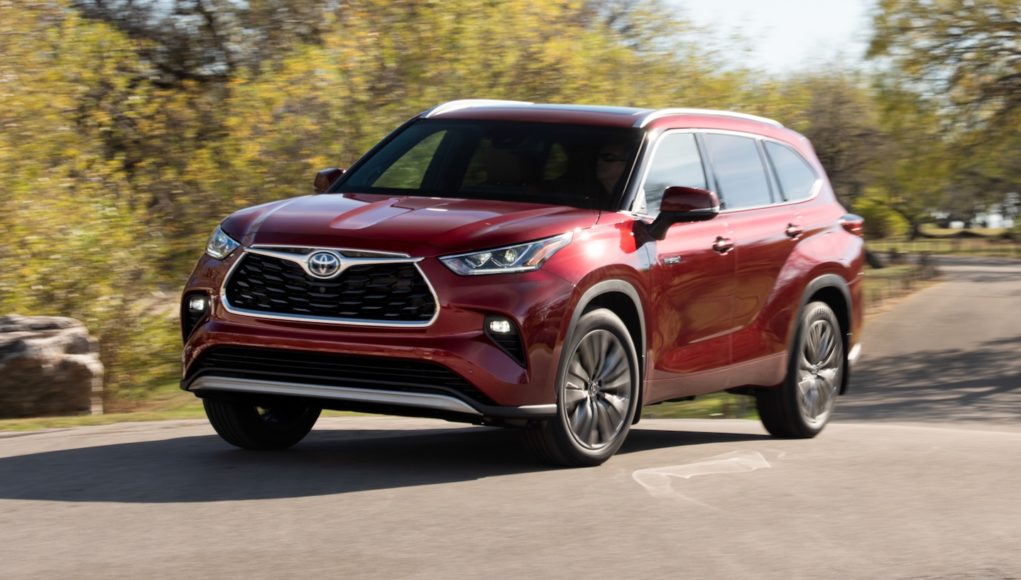 The 2020 Toyota Highlander puts practicality above all else but handling and styling make worthwhile cameos. While the all-new Highlander may not have the spacious third-row seats other three-row crossover SUVs, it has its own strong merits: excellent hybrid fuel economy and handling that rises above the usual complacent ride and distant steering. The redesigned Highlander comes in gas-only L, LE, XLE, Limited, and Platinum trim levels (which you can read about here), with hybrid versions of those trims from LE and higher, another class exclusive.

While South Korea’s biggest crossovers have swung for the bleachers with style, the latest Toyota Highlander gets pumped up. Last year’s model looked respectable, sedate, kind of boring; this year it’s hit the gym. From the grille back, the Highlander’s sills and fenders swell with almost human muscle-flexing; the kicked-up rear end looks ready to tackle wind sprints. Inside, the cabin brackets its big touchscreens above big horizontal shelves that lend the Highlander lots of small-item storage.

Performance from the 295-horsepower V-6 comes off as slick and effortless through a responsive 8-speed automatic. With the 243-hp hybrid system found in our test vehicle, you trade some power for class-leading efficiency and grins at the gas pump. The Highlander Hybrid gets up to 36 mpg combined, a remarkable number for a big family vehicle without a plug. Either Highlander’s ride and handling stacks up higher than rivals. The steering’s weighted well and offers useful road information while the struts and links in the suspension quell the ride with aplomb.

The 2020 Highlander’s larger footprint and more spacious interior pay off with vast space in the first and second rows, and comfortable seats await all four or five people who sit there. Toyota’s front-right seat can’t tilt its bottom cushion, which cuts a little into comfort. The third-row Highlander seats aren’t as good as those in the Pilot or the Korean twins, but they’re fine for the small, and the small at heart. Cargo space hits the benchmarks at more than 84 cubic feet behind the front seats.

The 2020 Highlander has roughed up its bland image a little. With the 2020 Highlander, Toyota has peeled back a layer of convention. The 2020 Highlander roughs up some of the crossover’s formerly arrow-straight lines and morphs its body with bulging sills and air intakes. It’s imperfect but interesting, especially inside where the Highlander flouts a flowing dash and organic curves.

The new Highlander’s shape isn’t much different than last year’s model, though it rides on new modular architecture shared with a number of other Toyota vehicles such as the Camry and RAV4. Its styling is less angular, with deeply defined lines that bulge with more prominence than in the past. At the front, the former ground-up grille has shrunk to normal proportions; the inverted trapezoid wears a big chrome barrette clipped on with the Toyota logo. The Highlander’s swollen loins give the body sides some attitude, though the tendon-like shapes look steroidal in contrast to the plainer doors and greenhouse. At the tail, high and pinched taillights lift the rear end far off the ground.

Toyota has performed some remarkable transformations to its new vehicles by spinning them off from a new global architecture. The Prius, the Corolla, the RAV4 all have significantly better handling than the cars they replaced. Add the 2020 Highlander to the list. It’s part of the same family, and with excellent powertrains on tap, the newly confident steering and well-damped ride quality of the Highlander elevate its family-vehicle game.

On gas-only Highlanders, power comes from a 3.5-liter V-6 rated at 295 horsepower and 263 pound-feet of torque that shuttles power to the front or all four wheels via an 8-speed automatic transmission. Even though the Highlander weighs at least 4,145 pounds, its acceleration feels strong and vivid. (See our review of the gas-only model here)

That’s also true with the Highlander Hybrid, our text vehicle, which can weigh more than 4,595 pounds. Toyota pairs a 2.5-liter inline-4 to a nickel-metal hydride battery mounted below the rear seats and a continuously variable automatic transmission (CVT). The hybrid system is good for a total output of 243 hp, but battery power pushes it briskly off the line, and it sounds eager off the start, if a little grumbly at full bore. It’s a second or more slower out of the gate versus the gas Highlander, but fuel economy rises to more than 35 mpg combined on most Hybrid models.

Regardless of what’s under the hood, the Highlander is offered in either front- or all-wheel-drive configurations. When equipped with all-wheel drive, the Highlander Hybrid has a second electric motor to power its rear axle. No mechanical connection exists between its front and rear wheels. Opt for the V-6 and the Highlander is rated to tow up to 5,000 pounds. Toyota says the Hybrid can tow up to 3,500 pounds.
Toyota sets up the Highlander with struts in front and a multi-link rear suspension and fits it with either 18- or 20-inch wheels. The differences between this Highlander and the last generation are vast: The 2020 crossover actually engages its driver with what’s going on at the road surface through steering with actual feedback and with ride motions that don’t feel ponderous. Hybrids fare even better; their heavier curb weight keeps the Highlander’s vertical ride motions in check. Front-drive Hybrids even strain at their leash and scrabble for traction until the rear electric motor gets into the action. The eager feel filters through the gas pedal and through the tires, something we’ve never said about any Highlander before now.

No crash-test scores exist yet for the 2020 Highlander. The IIHS has great things to say about the 2020 Highlander, but the NHTSA has nothing to report yet. The IIHS called the Highlander a Top Safety Pick after it aced all of the agency’s crash tests and earned a “Superior” rating for its front-crash prevention. Headlights are a mixed bag, depending on how much money you spend. Top headlights are fitted to Platinum models (hybrid or not), while Limited models get “Good” headlights by the IIHS, and the rest get “Poor” versions. The encouraging word is that all 2020 Highlanders include automatic emergency braking, adaptive cruise control, active lane control, lane-departure warnings, and eight airbags, and have fine outward vision. Safety options include a surround-view camera system with excellent high-resolution output.

Inside, the new Highlander groups most of its controls together around a standard 8.0-inch or optional 12.3-inch touchscreen for infotainment with redundant knobs and buttons below. We just wish you could use Apple CarPlay and have the side bar up for secondary info at the same time. The striking asymmetry of the cabin works well whether it’s rendered in the harder plastics of the base models or the softer, buttery finishes of the expensive versions. All the touch-sensitive controls angle toward the driver, while shallow storage bins and slim air vents sit ahead of the front passenger, similar to the RAV4 but with more upscale curves and styling.

The 2020 Highlander’s larger footprint translates to more space inside. Toyota pulls the Highlander like taffy to boost its interior space and storage. It’s become a better place for up to eight passengers, and the interesting styling of the cockpit bends toward lots of small-item storage. The new Highlander stretches 194.9 inches in all, is 76.0 inches wide, and rides on a 112.2-inch wheelbase.

In all trims, the abundance of space begins in the front row, where wide seats suit a lot of body shape. Base cars wear shiny but grippy cloth, while synthetic leather and real leather upholstery grace more expensive models. Toyota adds heated and cooled seats to the higher-priced Highlanders, and most come with a power passenger seat, but no Highlander can adjust the front passenger seat for bottom-cushion tilt. The driving position comes off better, given the low-mounted tilt/telescope wheel, available lumbar cushioning, and expansive head room, even under the panoramic sunroof.

The Highlander’s multi-tier dash forms a few shallow bins to hold smartphones, keys, and mail. The open bin in the center stack has a pass-through to the USB port below, same as the old Venza crossover. Wireless charging happens in the deep center console, under a slide-away cover. The less expensive Highlanders wear hard plastic high up on the dash and doors, but Limited and Platinum models get more soft-touch stuff, and a couture caramel interior scheme.

In row two, those lower-priced Highlanders also have a bench seat that’s fine for three adults across. Higher trims have captain’s chairs in the second row, separated by a low console, but all but the Platinum can be had with a middle-row bench with great head and leg room. The seats slide forward to open better access to the third-row seat, but can’t do so when a car seat is installed. That third-row seat still is better for smaller passengers; while second-row leg room checks in at 41.0 inches, the third row lags far behind at 27.7 inches. Behind the third row, cargo space grows to 16.0 cubic feet. With the row folded flat, the Highlander can lug 48.4 cubes. Folding both the second and third rows opens up 84.3 cubes, a vast space accessed by a standard power tailgate which goes hands-free on upper trim lines.

The $37,920 Highlander LE adds a power liftgate, blind-spot monitors, fog lights, and leather around the steering wheels and shift knobs. While the $40,720 Highlander XLE adds a power passenger seat, front heated seats, a power moonroof, and roof rails. For those who can’t live without more, the $44,720 Highlander Limited gets cooled front seats, JBL speakers, navigation, 20-inch wheels, and a few other features. The $47,970 Highlander Platinum tops the gas-powered lineup with a power panoramic moonroof, heated second-row seats, a rearview mirror that doubles as a display for the rearview camera, and a surround-view camera system. Hybrid Highlanders only come LE and up, but carry only a $1,400 upcharge, which makes the all-wheel-drive $43,720 Highlander Hybrid XLE our value pick of the lineup.

The large three-row crossover segment is currently a hotly contested battleground with strong players from multiple manufacturers. Luckily the new 2020 Toyota Highlander Hybrid is one of the best. With new found driving manners, modern styling, and cutting-edge technology; the new Highland impresses. The fact that it also offers class leading fuel economy easily makes it a winner.