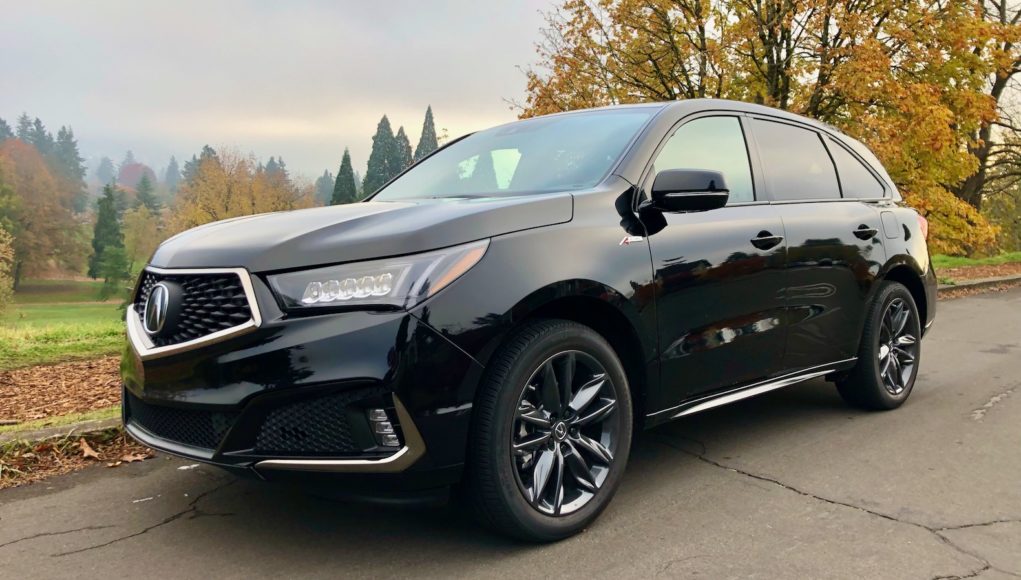 The 2020 Acura MDX three-row crossover makes all the right moves for family buyers. It’s spacious for up to seven, with handsome lines inside and out, and the MDX is serene and quiet on the road. Overall its friendly confines and quiet road manners will impress most families. All MDXs ride comfortably and calmly, a must-do for any family vehicle. We like the exterior and interior themes, which play it cool compared to other luxury SUVs that offer more glitz or more macho. The MDX is relatively aged compared to those other vehicles, but its lines still look good. This year, the MDX is largely the same as last year.

The 2020 Acura MDX dresses up a big crossover with tasteful lines. The MDX is relatively old compared to others in its class, but its lines have aged gracefully.Its interior is still handsome and elegant, and its exterior is pointed and pleasing, even with the SUV’s big proportions.  The MDX’s beak is still handsome, punctuated by a diamond-patterned grille that was introduced a few years ago. The headlights wrap into the front fenders with an arch that reaches further back into the doors. The creased hood eventually gives way to a long roofline that reaches back toward the rear fenders and meets with rear haunches that belie the crossover’s front-wheel-drive preference.  In back, the Acura skips over dowdy bulges with clean taillights and a pointed rear bumper that reaches higher than the wheels without compromising its low load floor.

Calm and collected, the 2020 MDX is a perfect road-trip vehicle. Road trips just aren’t what they used to be.  With the 2020 MDX, Acura has a three-row SUV that’s quiet and calm on long hauls. Its best attribute is its soft ride and easy-going nature, which stands in contrast to the long slogs we made in noisy sedans and wagons growing up.  A 3.5-liter V-6 that makes 290 hp is fitted under the hood of the MDX. It’s a tried-and-true powertrain that delivers adequate power to the big, 4,200-pound SUV. It accelerates confidently from a stop and can tow up to 3,500 pounds. Its operation blends seamlessly into the background without much notice.

Front-wheel drive is standard, although many will opt for all-wheel drive. The Acura system is a sure-footed, mechanical torque-vectoring all-wheel-drive system that’s one of the last of its kind. It can shuttle power from left to right up to 100 percent, or front to rear up to 70 percent. It’s an analog system in a digital world and we still like it.  Every regular MDX is equipped with a 9-speed automatic transmission that’s better behaved than in years past, it operates better at a deliberate pace. We have our quibbles with the odd pushbutton shifter that’s needlessly complex.  The MDX gets 18-inch wheels as standard fare, although 20-inchers are an option. No matter which tires the Acura rides on the ride is calm and quiet as was the case with our all-wheel-drive A-Spec MDX with the 20″ wheels.

The MDX Sport Hybrid pairs a 3.0-liter V-6 to hybrid batteries and electric motors. It’s similar to powertrains used in the RLX hybrid sedan and NSX supercar. In the MDX Hybrid it makes 321 hp, although any noticeable power gains are negated by the additional 200 pounds of batteries. Unlike the MDX, the Sport Hybrid uses its electric motors and hybrid batteries to provide all-weather traction. The electric motors in the rear of the MDX will spin up the rear tires when all-wheel drive is needed more, and although the system is different than the mechanical-based version in the MDX, it’s just as seamless. The MDX Sport Hybrid uses a dual-clutch 7-speed automatic transmission, which we prefer, instead of the 9-speed unit.

The 2020 Acura MDX is comparatively fuel-efficient among other luxury three-row haulers. Opt for the MDX Sport Hybrid and it becomes very fuel-efficient. The EPA rates an all-wheel-drive MDX without hybrid batteries at 19 mpg city, 26 highway, 22 combined. With front-drivers being more efficient than all-wheel-drive versions. The EPA rates the 2020 MDX with front-wheel drive at 20/27/23 mpg. The MDX with all-wheel drive and the A-Spec package that gets unique wheels cuts into fuel economy and is rated at 19/25/21. The MDX Sport Hybrid is the top of the pile and the EPA rates it 26/27/27 mpg.  Acura doesn’t have many competitors among three-row hybrid vehicles. The XC90 T8 rates 25 mpg combined, by the EPA.

Standard automatic emergency braking complements good crash-test scores in the 2020 MDX. Federal and independent testers agree that the 2020 Acura MDX is safe in a crash. The NHTSA gave the 2020 MDX five stars overall, including five stars in every subtest except the calculated rollover score, where it earned a four-star rating. The IIHS gave the MDX a Top Safety Pick award in 2019 and considering the similarities with this year’s version, we can carry over those scores. The IIHS rated the automatic emergency braking system in the MDX as “Superior” and noted that the crossover automatically avoided forward collisions at 12 and 25 mph.  The Top Safety Pick award applies to all MDX crossovers thanks to standard adaptive LED headlights fitted to all models. That’s relatively rare among crossovers, base versions usually skip over expensive headlights so kudos to Acura.

Outward vision in the MDX is OK but also compromised by the big Acura’s chunky rear roof pillars. We suggest opting for the Advance package that adds front and rear parking sensors for more help navigating the MDX into tight parking spaces. With three rows of seats in place, the MDX holds 15 cubic feet of cargo although the space is fairly shallow. With the second row stowed, the cargo space expands to more than 38 cubes. With only the front seats in place, the MDX holds nearly 70 cubic feet of cargo.

The 2020 MDX has a premium feel with seating for up to seven adults. The interior is clean, despite dual touchscreens and a pushbutton shifter that is too complicated for our tastes. Wood accents are dressy and complement the functional theme without muddying the composition too much. The Acura MDX comfortably seats up to seven adults, swathed in leather, in quiet confines. Related to the Honda Pilot, the MDX shines in carrying people and cargo. The MDX gets points above average for its front seats and back seats, another for its cargo space and another for its people-pleasing space.

The front seats are comfortable for nearly any body type, and MDXs equipped with the Advance package get deeper buckets that are more supportive but also narrower.  The rear seats are similarly comfortable, with good leg room. Acura quotes 36 inches, which is less than some rivals, but the front seatbacks are scalloped for better knew room. The rear bench can be swapped out for captain’s chairs in Advance models, which is really the MDX’s best look.  The third row is best for children, although adults 6-feet-tall or shorter can fit. The seating position is a little more knees-up than in the front two rows, but the seats are easily accessible with one-touch access in the second row. Three abreast is a big ask for adults, children will fit across better.

The Acura MDX’s infotainment is in some regards ahead of its time. The rest of the automotive world is largely just adopting the dual-screen infotainment systems the MDX has embraced for years, we just wish the interface and graphic were more up-to-date, but it gets the job done.The top 8.0-inch screen displays navigation and some vehicle information, while the bottom touchscreen is used for navigating menus.  When active, Apple CarPlay and Android Auto smartphone systems run on the top screen, which requires using the console-based clickwheel to navigate. The system is less polished than rivals on the market, but we’re sure owners won’t have an issue acclimating to the menus after a small learning curve.

Tech is what the 2020 Acura MDX does best. The three-row luxury crossover is well-equipped in every version with unobtrusive tech that fits well into our daily routines. Like last year, the MDX is available with three add-ons: A-Spec, Technology, and Advance packages. Base crossovers cost more than $45,000 and get leather upholstery, keyless ignition, 18-inch wheels, power moonroof, LED headlights, power-adjustable front seats, three-zone climate control, four USB ports, eight-speaker audio system, and a dual-screen infotainment system with an 8.0-inch display atop a 7.0-inch touchscreen. All-wheel drive is a $2,000 upcharge.

We’d opt for the Advance package that adds $5,000 to the bottom line, but still clocks in around $50,000 with mandatory destination charges. The MDX Advance adds 20-inch wheels, upgraded leather, wood accents, remote start, blind-spot monitors, parking sensors, navigation, upgraded audio, and telematics.  The A-Spec appearance package doesn’t make the MDX any sportier, but adds accents to the interior, successfully removing the wood trim, and exterior that are attractive, but at $3,500 it’s a steep price to pay. At the top, the MDX with A-Spec, Advance, Technology, and rear-seat entertainment tops $60,000. The MDX Sport Hybrid is available with Advance and Technology packages that push the price beyond $60,000, but can’t be equipped with A-Spec or rear-seat entertainment add-ons.

Base MDX’s don’t skimp much for features. They’re equipped with leather upholstery, keyless ignition, 18-inch wheels, power moonroof, LED headlights, power-adjustable front seats, three-zone climate control, four USB ports, eight-speaker audio system, and a dual-screen infotainment system with an 8.0-inch display atop a 7.0-inch touchscreen with Apple CarPlay and Android Auto baked into the system. We’d opt for the Advance package that adds bigger wheels, interior accents, uprated audio and blind-spot monitors for $5,000 more. It’s a great family crossover that deserves a long look by anyone in the market for an upscale crossover.