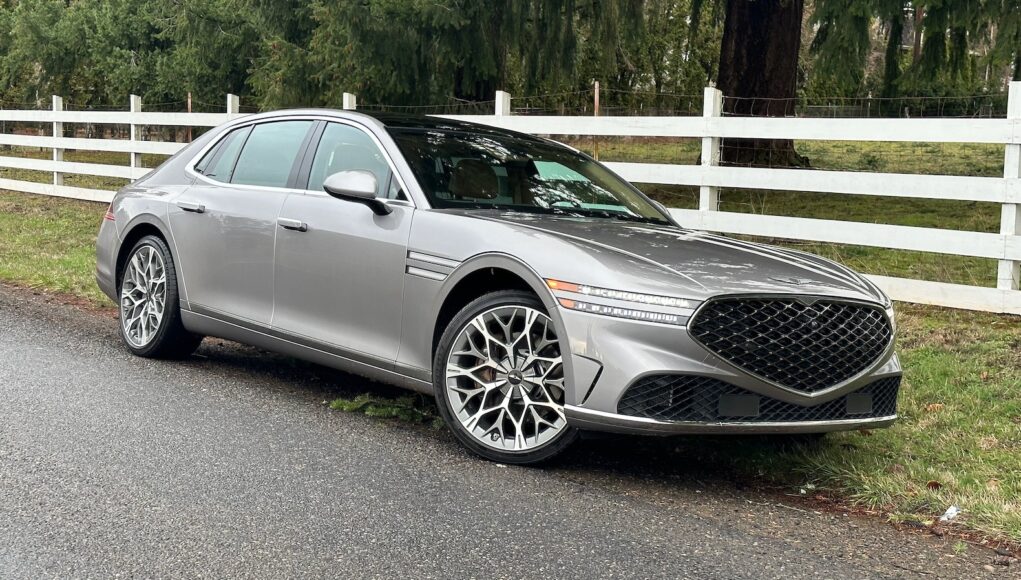 The 2023 Genesis G90 brims with luxury-car confidence and sizzling dynamics in its quest for prestige. The G90 four-door takes the top spot in the South Korean luxury brand’s lineup. The flagship sedan competes with full-size luxury cars such as the Mercedes-Benz S-Class, BMW 7-Series, Lexus LS, and Audi A8. With the growth in its sticker price, the G90 doesn’t stand out as much as it did in the past. It’s still a fabulously finished car with a strong powertrain, but it’s less a value than ever, with prices hovering near $100,000.

From the outside, the G90 poses a vexing question: can one car merge two distinct styling themes successfully? The shield-shaped grille, swept front fenders, and thin LED headlights echo the handsome look of the smaller G80 and G70 sedans, and there’s an elegant shoulder line that falls to the tail with the grace of a classic ponton-style fender. Atop that, the G90 gets a greenhouse that’s tall enough to preserve rear-seat head room, and recalls some Maserati four-doors from the late 1980s. It’s an stunning mix that concludes with a slim set of taillights and a lozenge-shaped rear end that connects the G90 to its dazzling but lower-prestige Hyundai cousins.

A magic-carpet suspension gives the G90 a graceful ride. Genesis gives the G90 a twin-turbo V-6 with V-8 power and a suspension that can study camera data to smooth its ride. The G90’s a 3.5T in either of its forms: both sport a twin-turbo 3.5-liter V-6. It’s rated at 375 hp and 391 lb-ft of torque in the standard version; the upgraded version gets a 48-volt mild-hybrid system that acts as a supercharger for more low-end power and smoother stop/start action. It’s rated at a net 409 hp and 405 lb-ft of torque.

Both versions require premium fuel, and both deliver peak engine torque at a low 1,300 rpm. They operate in a generally quiet, obedient way. A jab at the gas triggers a downshift or three through the 8-speed automatic, and if it’s pressed hard the engine groans distantly behind a thick blanket of sound deadening. Genesis doesn’t publish 0-60 mph times, which we estimate at well below six seconds. It could be quicker, but the G90 weighs between 4,861 and 5,192 lbs. since very G90 is all-wheel drive.

The G90 can flow easily with traffic in its comfort-oriented default drive mode, thanks to its multi-link suspension. Its adaptive dampers tap into cameras aimed at the road ahead, which allows them to tailor the ride better to the approaching surface. On the mild-hybrid edition, Genesis adds a multi-chamber air suspension for supreme resilience and bragging rights. It’s slick, with a state of tune just below floaty; occasional bumps will resonate through the body to remind you that this is a long and heavy car. For those who intend to be driven, a Chauffeur mode softens the rear suspension more proactively, so the world can’t intrude on things too much.

What it can’t do is alter the facts of physics to render the G90 nimble. Even with the rear-wheel steering and tighter turn radius of the mild-hybrid model, and uprated tires (the base 20-inch wheels with 245/45R20 front and 275/40R20 tires get uprated to 245/40R21 front and 275/35R21 tires on the mild-hybrid version), it’s a languid mover through corners, with just enough crispness in its Sport steering mode to track well on interstates and not make a mess on backroads.

There’s nothing frugal about the G90 with the standard version more efficient than the mild-hybrid edition. The EPA rates the base G90 at 18 mpg city, 26 highway, 21 combined. With the 48-volt mild-hybrid system on board, not to mention a lot more standard equipment, it nets 17/24/20 mpg. All the extra power that comes from the mild-hybrid system applies directly to performance it seems.

The G90 hasn’t been crash-tested and we may never know. It’s expensive and rare, and usually that means the NHTSA and IIHS will not schedule it for a crash test. What we do know is that the G90’s ridiculously ready for any trouble. Standard equipment includes not just automatic emergency braking, blind-spot monitors, and adaptive cruise control, but the list goes on to include LED headlights, active lane control, blind-spot cameras, stop-and-go control for the cruise system, a head-up display, a surround-view camera system with a ¾-view of the car that’s even more helpful in tight parking spots, and remote park assist for tucking it away from outside the car.

Genesis’ adaptive cruise control allows long periods of hands-free driving. It went without steering input for more than two minutes on the open highway before sounding a light alert chime and then flashing a red steering-wheel graphic on the right side of its cluster. It’s automatic lane-change function proved just as smooth than BMW and Benz systems, if not better.

Inside, the G90 strikes out on an equally adventurous tangent, but here it succeeds. A sweep of digital displays and touchscreens goes for a more horizontal theme than the smaller Genesis sedans. It’s wrapped in soft-touch synthetic leather, trimmed with wood, glints with hints of aluminum trim and glass, and locates major controls in convenient groups—a pill-shaped frame encircles climate controls, while a console corral herds up the transmission and infotainment controllers. A pair of distinctive trim pieces frame the gauge cluster with some of the drama of an Exner Chrysler, without going overboard for its own sake. It’s stunning, in a refined and high-quality way.

The G90’s cabin is full of fine materials and comfortable seats front and rear. The G90’s full-size swagger means ample space for four large people, but their bring-alongs get less attention. The same holds true for an unlucky fifth passenger wedged in back. The G90s fit and finish are spectacular, its front seats supremely supportive as well as its outboard back seats; all four seats can optionally massage.

With a wheelbase of 125.2 inches, the G90 sits 207.7 inches long. That’s a lot of footprint from which Genesis carves out lots of space for people. It’s noticeable in front, where the 18-way driver and 16-way passenger power seats sit surrounded by a low dash and door panels sculpted to extract as much room as possible. The power controls for the seats are easily found on the side of the seat bottoms, and with adjustment in ways we didn’t know we needed, headrest height and rake, they’re simple to place in the perfect spot. The front seats have a prominent cooling fan, and when the G90’s placed in Sport mode, its seat back bolsters cinch and the seat bottom adjusts its shape to create a pocket for better comfort.

The G90 dazzle with its simply elegant array of controls. A steering-wheel touchpad allows swiping between audio favorites, separate from touchscreen inputs. Four buttons control the power-open-and-close doors. The rotary shifter buzzes when it changes modes. Speakers in the driver’s headrest call out navigation changes without disrupting the main system audio. The G90 benefits from Genesis’ exuberant style and its pitch-perfect attention to detail. Whether it’s the speaker grilles, glass shifter, wrapped dash, or nappa leather interior, it’s as beautifully rendered as any of its even more expensive rivals.

It’s more serene in the back, where the G90 sports more than 38 inches of head room  and more than 37.9 inches of leg room. With the upgraded model there’s also cooled rear seats with power adjustment and massaging, bathed in the scent of the in-car fragrance dispenser. It’s a place meant for reclining on long trips, so much so, the skinny middle seat’s an afterthought, much like the 12.0-cubic-foot trunk (just 10.6 cubic feet with the mild-hybrid model).

The G90 tips the features scales as it presses against the $100,000 barrier. The all-new 2023 model comes stocked with a laundry list of luxury touches, even in its lower-spec edition. With all the standard features and options, a capable infotainment system, and a standout warranty; the Genesis G90 still exudes value. Each G90 also comes with a 5-year/60,000-mile warranty with 3-year/36,000-mile complimentary scheduled service and valet service for car pick-up and delivery. The powertrain warranty runs 10 years or 100,000 miles.

Genesis is still the new kid on the block but with knockouts like the G90, has quickly become top dog in its class. With stunning looks, commendable driving manners, and topnotch technology with a great value proposition; it’s easy to see how the new Genesis G90 is stellar. For those looking to try something new and step out of the current luxury flock, the all-new 2023 G90 is definitely worth a look. 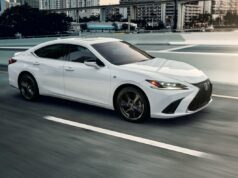