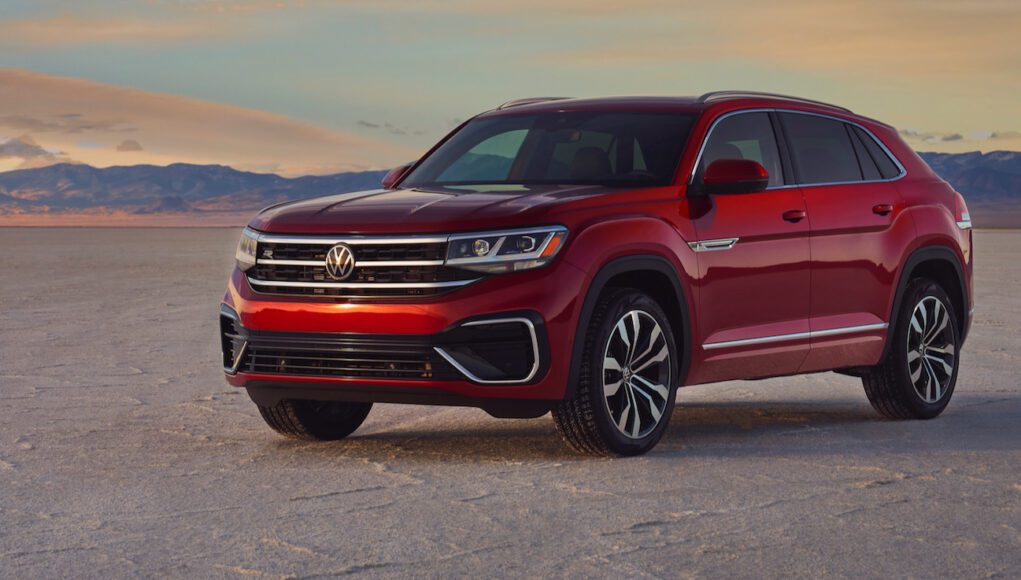 You want style, space for five adults, a good warranty, and enough cargo space for a long weekend trip? I would answer with the 2021 Volkswagen Atlas Cross Sport. Sure, the Chevrolet Blazer looks sportier, the Honda Passport has a sliding second row, and the Jeep Grand Cherokee is more capable. None of these competitors combine presence, carrying capacity (for both people and cargo), and value like the Atlas Cross Sport. Until now, Volkswagen really didn’t have an answer to mid-size crossover shoppers other than the three-row team Atlas. Admittedly, the smaller VW Tiguan already on dealer’s lots is a giant-size compact crossover with lots of space. The full-size Atlas is mostly cut from the same cloth: big space, basic personality, but its third row is unnecessary for many shoppers.

Now, VW’s near-term plan to right its ship and cater to buyers who demand crossovers is the 2021 VW Atlas Cross Sport. It’s the first true, two-row mid-sizer from the company that has a fighting chance to conquer the growing mountain of cash that buyers want to throw at it. It competes against mega-sellers such as the Jeep Grand Cherokee, Ford Edge, Chevy Blazer, Nissan Murano, and Honda Passport. The Atlas Cross Sport is bigger than most of those, even with 5.2 inches lopped off the rear end compared to the Atlas. Like the Atlas, the Cross Sport is offered in S, SE, and SEL trim levels with tech, premium, and R-Line packages skittered into the crowd. The Cross Sport starts at $31,565, including destination, which is $1,000 less than the starter Atlas. At the top end, the Atlas Cross Sport sniffs $50,000, which is less than top trims of its competitors.

The Atlas Cross Sport doesn’t have the in-your-face swagger that the Kia Telluride exudes, but with sharp 20-inch wheels filling the wheel wells, flared haunches at all four corners, sloped roofline, stubby rear end, and blunt front end, the Atlas Cross Sport has presence. It looks sportier than the Atlas, like the Audi Q8 is to the Q7. Officials at VW are keen to point out that the Atlas Sport Cross is new from the windows up. That’s the best way to say that the hood, the doors, most of the interior, the skeleton, the engine, the drivetrain, and most of the wheels on the Atlas Cross Sport are all from the Atlas.

That’s because the Atlas Cross Sport is powered by a 2.0-liter turbo-4 or 3.6-liter V-6 borrowed from the Atlas. Both pair up to an 8-speed automatic transmission and front- or all-wheel drive, the latter of which is a new stablemate to the 2.0-liter turbo-4 for this year. The 235-horsepower turbo-4 is surprisingly potent; our drives around town and on the highway didn’t tax the 4-cylinder’s effort much. VW says until now roughly one in 10 Atlas buyers opted for the turbo-4, which they expect to rise modestly with the addition of available all-wheel drive. The 276-hp V-6 is more common and more satisfying, although its 19-mpg combined rating by the EPA is down to nearly every other mid-size competitor except the Grand Cherokee’s V-8s. All-wheel drive will make its way into most Atlas Cross Sports that drive off dealer lots, although the system is geared more toward all-weather confidence rather than off-roading.

The Cross Sport steers down the road with feather-light turns of the wheel, and it tracks down the middle well—even without the available traffic-jam driver-assistance feature turned on. Its turning radius is much smaller than we expected, and it’s very comfortable for long hauls. Cruising down the highway with the adaptive cruise control set above 70 mph, the Atlas Cross Sport is a nice place to spend your time. The front buckets are comfortable with good bolstering both on the seatback and bottom. For a mainstream vehicle it’s quiet with little to no wind noise despite the large side mirrors, and the steering asks for little effort to make lane changes. To that end, the Atlas Cross Sport is equipped with 18-, 20-, and 21-inch tires that fill the crossover’s big wheel arches. The 20- and 21-inch tires look best, although they’re offered with the R-Line packages and can push the Cross Sport’s price to nearly $50,000 in SEL trims.

EPA ratings come in at a meager 17 mpg city, 23 highway, and 19 combined for the 3.6-liter V-6 with all-wheel drive. The Honda Passport comes in at 24 mpg highway with all-wheel drive, the V-6 all-wheel-drive Blazer at 26 mpg, and the Nissan Murano can get 28 mpg on the highway according to the EPA. The only competitor that gets worse ratings is a Jeep Grand Cherokee when equipped with a V-8 and 84 more horsepower. The 2.0-liter turbo-4 with all-wheel drive fairs slights better at 20 mpg city, 24 highway, and 22. Both versions gain 1 mpg in the city with front-wheel drive. In the real world the Atlas Cross Sport 2.0 SEL Premium beat EPA estimates with an average of just over 22 mpg in it’s week with us.  The Atlas Cross Sport’s 5,000-pound tow rating is in the middle of the competitive set of mid-size crossover SUVs. After towing 5,000 pounds of fishing boat on a dual-axle trailer, I can’t recommend doing the same in the Atlas Cross Sport. You should plan on towing 80% of your vehicle’s rated capacity, or 4,000 lbs max in the Atlas Cross Sport.

Unlike the family-ready Atlas, there are more than 40 inches of rear seat leg room in the Cross Sport thanks to a wheelbase that measures more than 117 inches and a canceled wayback. Five seats can be roomier than seven, which is why mid-size crossovers like the Atlas Cross Sport are more popular with shoppers. The window line, roof line, and even some body creases on the Atlas Cross Sport appear to be borrowed directly from the Audi Q8, another big, five-seat crossover, although the two aren’t directly related.Thanks to only being 5.2 inches shorter than the three-row Atlas, the Atlas Cross Sport can swallow 40.3 cubic feet of stuff in back, which is 9.8 more cubes than a Chevrolet Blazer, and 8.2 more cubic feet than the Nissan Murano.

The dashboard is functional and business-like with its design. All the main controls feature knobs, switches, and buttons. Anyone in the Atlas Cross Sport will know how to change the climate control system, whereas some might be confused when it comes time to do the same thing in a Blazer. The 8.0-inch touchscreen infotainment system is easy-to-use, thanks in part to volume and tuning knobs; the interface has no lag like Honda’s system, and it looks modern. Five USB ports (two in the front, one in the center console, and two in the rear) keep devices charged, although not without some prior planning involved.

On Atlas Cross Sports equipped with a standard 6.5-inch touchscreen for infotainment or with an 8.0-inch touchscreen on upper trim lines. Top trims and tech versions add a 10.3-inch digital instrument display that’s bright, but not necessarily easy to read. On Atlas Cross Sports equipped with a heated steering wheel that’s been activated, the icon for the wheel appears instead of the trip meter. The forward-facing camera on those versions sticks out of the front grille like an outie belly button, too. The Cross Sport flexes on what made the Atlas appealing for crossover buyers anyway. It’s big space for a reasonable price tag, with a better-than-average warranty. It’s the answer VW needed to have for shoppers looking for something bigger, just not with three rows of seats.